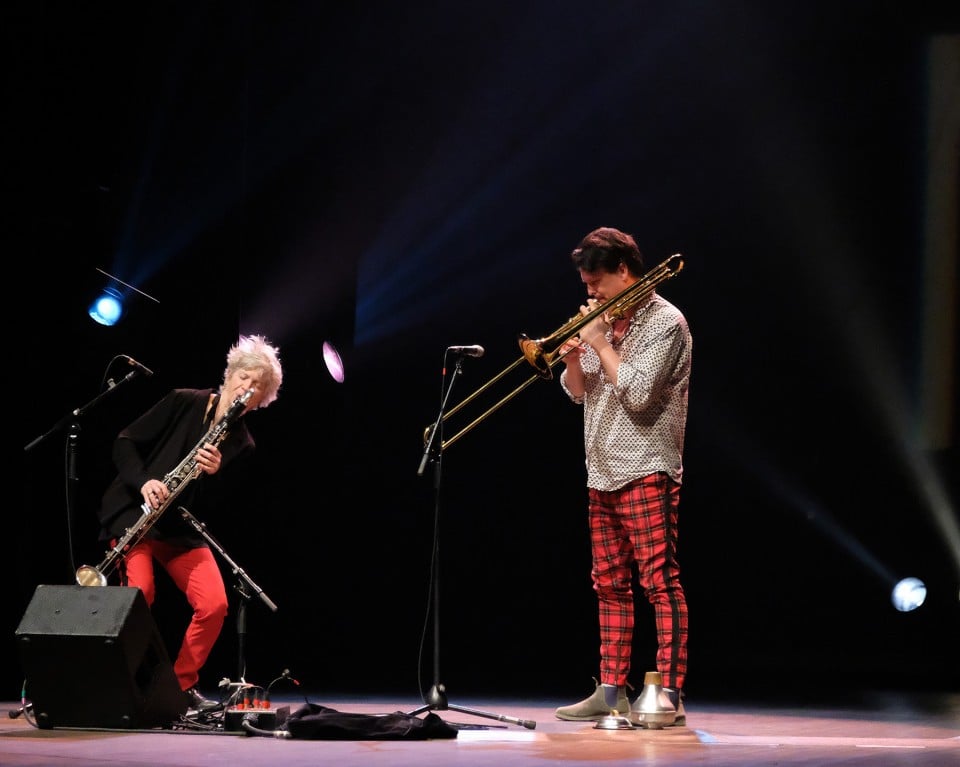 Scott Thomson and Lori Freedman first played together in Toronto in 2006 where they immediately identified musical affinities: dynamics of tone and timbre, heterodox lyricism, the internal propulsion and forward motion of openly impro- vised material, freedom of expression, and play. Their instant rapport made it promising to record Plumb (2007, Barnyard Records), the first recording in Thomson’s and a notable addition to Freedman’s discography. In his liner notes, esteemed music writer Mark Miller identified the duo’s “folksy sort of virtuosity – amiable, agreeably unpretentious, and without the patented sheen of the conservatory.” In the years to follow, and especially after Thomson’s move to Montreal in 2010, they would work together frequently in the Ratchet Orchestra, Murray Street Band, and Ensemble SuperMusique, but only in 2021 did they reconvene for a follow-up duo recording, Amber (forthcoming 2022).
Freedman and Thomson are both acclaimed solo performers and have been featured as soloists at the renowned Festival International Musique Actuelle Victoriaville, for instance. Separately, they delve deeply into the technical and expressive resources of their instruments to satisfyingly sustain long-form solo improvisations. However, the duo is markedly more than the combination of its soloist parts, and each agrees that the other impels him or her to thrilling, visceral music they simply would not play otherwise, an alchemy of group improvisation. Ranging crazily from quiet stasis to chops-throttled entropy, the duo’s current music, made abundantly manifest on Amber, is richly reinvented in every vital incarnation.
Lori Freedman (clarinets) is a member of the international group of people currently named “the renaissance mu- sicians.” Freedman’s artistic practice spans the gamut. She is immersed in both contemporary and improvised music streams and known internationally for her provocative and creative performances. As an interpreter of written music for clarinet hundreds of works have been dedicated to and/or premiered by her. While managing a full performance sched- ule (more than 75 concerts a year), making recordings, touring, and leading workshops, Freedman has also been receiv- ing commissions to write music for notable contemporary music ensembles including Arraymusic Ensemble, Ensemble Transmission, Continuum Contemporary Music Ensemble, and many more. Her solo works have been presented interna- tionally (Taiwan, Australia, Eastern and Western Europe, UK and USA) and she has received performance invitations from organizations such as the Huddersfield Festival (UK), the International Society of Contemporary Music, the Gaudeamus Festival (Holland), À l’Improviste (Radio France) and notable venues such as The Loft (Germany), Rai Radio (Italy), Redcat Theater, Roulette, and The Stone (USA). In 2017 she was elected as a Fellow of the Royal Society of Canada for “out- standing artistic achievement,” twenty years after having received the Freddie Stone Award (1998) for the “demonstra- tion of outstanding leadership, integrity and excellence in the area of contemporary music and jazz.” • lorifreedman.com
Scott Thomson (trombone) is a Montreal player and composer whose commitment to open improvisation is the basis of much of his work –– as a soloist, with Lori Freedman, and with Monicker (with Arthur Bull and Roger Turner), for example. His songs on texts by others for singer and dance artist, Susanna Hood, have been played in many contexts, some involv- ing her choreography. As a producer, Scott has co-led the Association of Improvising Musicians Toronto, the AIMToronto Orchestra (to work with Anthony Braxton), and the Montreal-Toronto Art Orchestra (to work with Roscoe Mitchell); and he founded the Toronto studio venue, Somewhere There. He has made site-specific works for mobile musicians and audi- ences in unconventional contexts including, notably, the National Gallery of Canada and the Art Gallery of Ontario. With Karen Ng, Scott programs the Guelph Jazz Festival. • scottthomson.ca
Listen to Amber (private Bandcamp link): https://sowehear.bandcamp.com/yum (redeem download code) Contact Lori Freedman & Scott Thomson: sowehear@gmail.com • IG @sowehear
Photos by Elaine Louw Graham & Martin Morisette